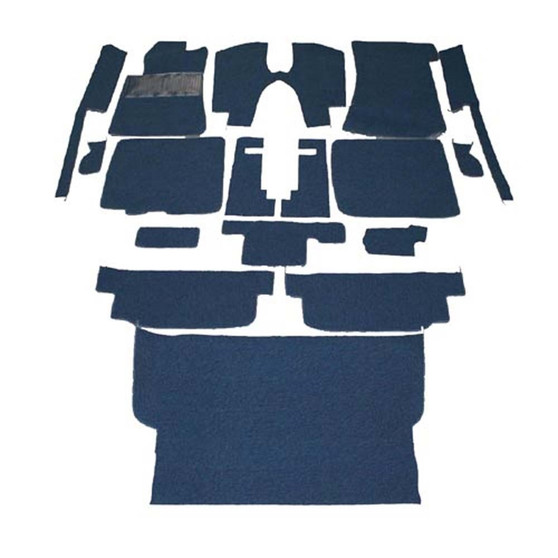 New Mercedes Complete Feintuft Velour Carpet Set.
This is the Late-Style Velour Carpet common to a variety of years and models beginning in 1980. Earlier models may have German Loop carpet instead of Velour.
Original carpet included a rubber backing. This is a thicker carpet that does not have a rubber backing.
Includes all interior pieces except trunk, which can be added to your order for an additional $200.
Standard set is LHD (Left-Hand Drive). Please inquire as to the availability of RHD Sets for only $60 more.
Manufactured by a US company that has been making specialty import upholstery parts for almost 40 years.
Please specify your year and model when ordering, as this will be custom-made just for your vehicle.

Includes One-Year Manufacturer Warranty.
Custom-manufactured upon your order! Please allow up to 3 weeks before we ship.

For W124 owners: Please note that this kit does not come with molded carpet for the rear passenger footwell as was originally installed in your car. As such, the installation will be more complicated. Feel free to contact us for details. Additionally, the pattern for the wagon carpets is not available. If you would like to order a W124 wagon carpet kit, please inquire with us before placing your order.

Spice up your Benz with a set of Brand New Plush Pile Vinyl Floor Mats! For most classic Mercedes mo…